mr zee
Posts: 577
I have been playing bass for about 40 years and have played in quite a few bands. I can listen to songs and generally sort the basic riffs out in a few hours and depending on the complexity of the song I can suss the rest out in a week or so. My problem is transferring that song to a tab. ive done some tabs for bbt some ok some not ok. Although I have played for 40 years or so I know jack about music lay out. I can learn a song, rehearse it and usually play it ok but my downfall is transferring some of them to tabs because I don't know how to set them out like trying to put 2 bars of notes into one bar. Anyways I will keep trying

Lon might be able to help you out here. Lon's tabs are pretty thorough, and I think he does a great job of placing the numbers in the measure and following a time signature.

I struggle with that too. I can usually pull notes and chords out of a song, but figuring out other players' fills takes me a long time. When I have to write these things down to help me remember when I play, I usually just write the sequence of notes in a straight line, broken into basic song elements (Verse, chorus, bridge, etc.). Nothing anyone would be able to follow, but it helps me and usually snaps my memory back after looking at it.

We used to play this tune in A
The suffix lowercase letter told me which string to play the note on so Fh would be 3rd fret on the D string as opposed to 1st fret E string. h = high note. Odd way of doing it but it helped me loads when I first started playing and I used to have a bass neck drawn with all he notes shown too. I joined BBT about six months ago and started tabbing and so far have done good, bad and utterly useless tabs

Bet that would be really tricky on a 6-string bass.

I can't turn bbt software into tabs, Lord knows I've tried but giving up was more satisfying than persevering

This is one of my ‘tabs’

I seldomly write one. 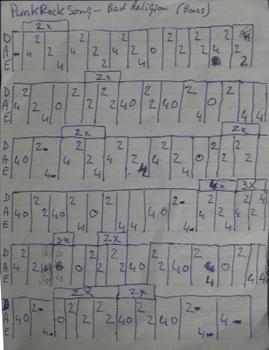 Its better than a lot of mine

Your tab for Bowie's 5 Years and Rod's Handbags was very helpful to me. I think your doing a fine job. Practice makes perfect, right? Remember there is only one Lon and, we are lucky to have him.

I totally agree and one day when he maybe isn't as busy I will try and get some tips off him. lol

Quote:
Yep, I would list the notes out just like that. Well… not exactly like that. I didn't use the ‘h’ notation.Bet that would be really tricky on a 6-string bass.
Its tricky on a 4 string as half the notes repeat after 12th fret. Blimey, we have some weird and wonderful ways of learning things

I'd be happy to help, as soon as I have time to do so. I'm just crazy busy during the summer. I drop in frequently, but it's only a minute or two at a time to do my mod thing, make sure nobody's causing trouble. It'll be a bit before I have the kind of time necessary to really chip in and be of help with this kind of thing.

In the meantime, try checking out a program called Power Tab. It's an older app from the early-mid ‘00s, but it’S free and it doesn't take much googling to find archives full of tabs made with that program (also all free). I used it for a couple years back in the day and actually learned quite a bit from it, despite having already been an experienced musician back then.
<< <
1
2 3 4 5 > >>