SHOULD WE MENTION TOM PETTY'S PASSING, HE PLAYED BASS IN THE WILBURY'S?

A very talented musso but not my cuppa tea. A sad loss never the less. 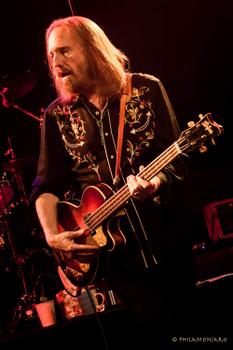 …Maybe down the road when somebody plays…Purple Haze…

Tom Petty should be mentioned not because he was a bass player once, but because he's Tom Petty. Fan or not, you can't deny the man is one of the most recognizable and respected rockers of the last forty years. I personally didn't like ALL of his stuff, but what songs of his I did like, I liked quite a bit. I've had a few of his songs on my to-do list for a while. Sorry to admit it's taken him passing away to remind me.

So that's a yes then. I only heard the songs of his that were played on the radio and I liked them, but not enough to rush out and buy his albums, I always sing along (badly) to Freefallin, so he did something right.

Sad loss. I found it hard to single out one person's death on the same day 59 others were gunned down.

I wasn't a huge fan, never bought any of his albums actually. But I did like a lot of his music. I also found his satellite radio channel refreshing to hear something that wasn't so mainstream and over played.

Quote:
Sad loss. I found it hard to single out one person's death on the same day 59 others were gunned down.

And all 60 had expectations of seeing the next day, which makes it worse.

Borrowing from Stephen King, you know they've got a hell of a band, and some great fans, too…

But surely, isn't it every mans right to bear arms? It's in the 230 year old constitution ffs, where wild animals and even wilder natives were rampant!

Sort yourselves out America

If only our Founding Fathers had a little more foresight they would have protected our right to play bass!

When you count the 8,124 people that died from gunshot wounds in the U S in 2014 then the 60 that died in Vagas is a drop in the ocean, also, the right to bear arms is a typing error, it should read, ‘The Right To Bare Arms’, ThunderBassist Jay lives by this amendment on a daily basis…