This breaks my heart.

I was really shocked to hear this earlier this morning, what a set of pipes that fella had and those songs wow just great but 52 years old flippin eck that's scary

Caught them a few years ago at Hyde Park supporting Sabbath,they played the Superunknown album in its entirety and it was flippin awesome

“Gutted” sounds about right. Being a full-on Generation Xer, Cornell and Soundgarden were hugely influential on me as a musician, and I've always felt Cornell would go down in history as one of the all-time great rock lyricists/songwriters. I remember the first time I heard them, I was 20, and saw a commercial for the release of Badmotorfinger, featuring a clip from their Outshined video. I remember thinking, wow, who are these guys? They sound bad-ass. Then I got the CD and man…it just blew me away. That voice, those riffs, those amazing lyrics…

Like Cobain, Staley and Weiland, Chris Cornell was one of my heroes, and like them, he died far too fucking young. Rock in peace, Chris. You'll be missed.

Sadly this is the last ever time I saw Motorhead as well,remember the good times aye what a day out 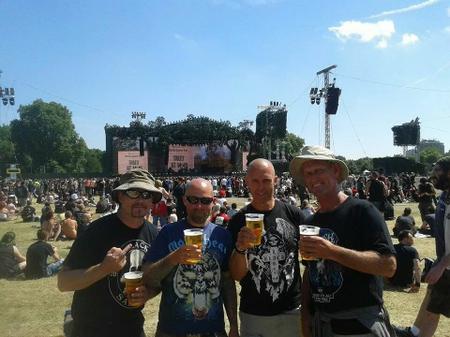 I hope what's being circulated as the cause is purely rumor. Seems like Chris had a lot to overcome in his younger years, but had everything going for him now, family, health, wealth, philanthropy, his freedom in music.

Way too young to leave.

Deeply saddened by this news, a great songwriter with a great voice. RIP

According to Sky News

Quote:
The lead singer of US grunge rock band Soundgarden, Chris Cornell, died after hanging himself, according to medical officials

I'm dumbfounded. I would have thought maybe a delayed reaction from his past drug abuse; I spent years as a social worker and rehab counselor, and it's not as though just because you kick you magically undo any damage your previous usage may have done. That's how Peter Steele passed, he spent years as a bad alcoholic, and though he eventually went through rehab and kicked, his heart had already been irreparably damaged by the booze. I've been thinking Cornell sadly suffered the same delayed fate.

But suicide? With Cobain, you could kind of understand it; knee-deep in heroin addiction, living his life under a microscope, etc. But Cornell? He's had decades to get used to the attention, he's been sober for years, has a loving family, a new tour, prepping to record new music with his band, financially set for life…it just doesn't make any sense. I'm more angry than sad now.

If the news about suicide is correct he must have had, I dunno, something going wrong somewhere. Poor guy R.I.P

There's speculation that this made have been an auto-erotic suffocation. Early reports said he was found slumped over in his bathroom. Then the coroner came out and said the cause of death was suicide by hanging.

It's pretty strange. For reasons said, I have a hard time believing it was depression. All the interviews I've seen and read from him indicate that he was a very positive person. I thought he was a bit of a health-junkie now as well with eating right and being careful of what he put in his body.

But like Lon said, perhaps old demons come back to visit, and he wasn't able to handle them this time around. Or maybe something kinky went terribly wrong.

Sad! For your information: http://www.msn.com/en-us/music/news/singer-chris-cornells-death-ruled-a-suicide/ar-BBBgSOR?li=BBmkt5R&ocid=ientp
<< <
1
2 > >>