Quote:
Why do people compare difficult stuff to rocket science? A cylindrical object, sealed at one end and packed with a highly flammable propellant, the propellant is ignited and is forced through the open end thus creating propulsion…rocket science, come on people its not like playing bass!!

Making a rocket go is easy. Making a rocket go where you want it to is the challenge. And what is amazing is that we sent men to the moon, and the Voyager probes outside the solar system, with less computing power than it takes to autotune just one Justin Beiber song.

Ah yes, the Moon, thank god for Nazi rocket scientists, all those V1s and V2s that landed on London, (England) only caused a fraction of the damage that the RAF inflicted on Dresden in one night

A V2 landed on me grandads hen house but it didn't go off cos it had a loose jack socket, one of the washers was on the wrong side of the nut

That could have been a totally different story if Locktite was available to the nazis. 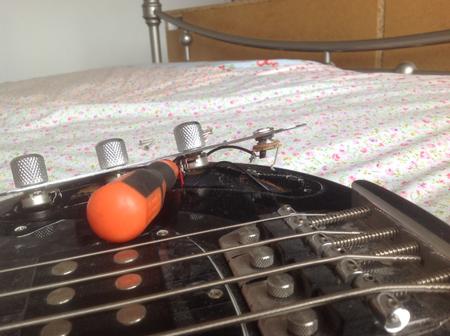 Took drastic measures to prove my point but the pic isn't too clever, try zooming in

I cant zoom in on the picture but I think I see what your talking about. Mine doesn't look that, my pre-amp cover is on the back and by jack on the side. Also mine looks like a little rectangular box with threads coming out of one end the wires the other.

Took it to the shop today and it turns out it was a broken wire, the tech showed it to me. He had other guitars to work on ahead of mine so I should hopefully get it back tomorrow.

Got it back from the shop today. Turns out the root of the problem was a short in the pre-amp. They ended up having to send it to their luthier but they say it only took an hour to fix.
<< < 1 2
3
> >>