purplez
Posts: 189
These look nice if you like short scale semis..

They do look really nice

Davie 504 plays a Chowny in one of his vids. Sounds and looks cool. Like a Gretsch, but for a third of the cost

Yep they do look nice BUT, arent they just a Gibson EB0 copy?

Quote:
Yep they do look nice BUT, arent they just a Gibson EB0 copy?
They look nothing like an EB0. But they are a copy of the Gretsch Falcon bass

Ok, they do look nice BUT, arent they just a copy of a Gibson EB2 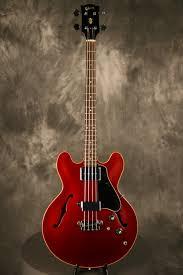 That one does look much closer, but it's clearly a Gretsch copy

Gibson were the biggest guitar maker in the 20th century with the most innovations such as humbucking pick ups and the truss rod, this design was introduced in 1958 with the ES 335, Gretsch could barely hold a candle to them

True. But it still looks a lot more like a Gretsch. And all that was a long time ago, Gibson doesn't even make basses anymore

Wanna see (and hear) a Chowny in action?