IamMark
Posts: 1103
I haven't been in a studio to record anything in over 15 years. I'm sure a lot has changed changed.

I've been asked to go to Baltimore to record a bass line I wrote for a friend who plays with a musician songwriter.

I'm trying to figure what to bring in to the studio.

Do you guys bring your whole rig and mic your speakers, or line out from your amp or pedals for recording?

Last time I was in a studio I took my 1975 Peavey TNT 150, the engineer wasnt too impressed, he had to mic it due to its age but the result was spot on, its built like a brick shithouse and works perfectly. It was built in the U S, I had a later one with loads of knobs and whistles but it was piss poor.

Quote:
I haven't been in a studio to record anything in over 15 years. I'm sure a lot has changed changed.

Are you sure sure? Maybe nothing's changed at all all.

I don't know what happened there.

I think it's the same with more advanced gear.

The guy whose project this is said I should plug right in to the engineer's board. They'll, “take it from there.”

Makes it easy for me not to drag all my stuff around.

I'm off to Baltimore in about 2 hours to do this. That is if the studio isn't on fire and being looted right now.

If you don't see me post again, check out CNN for the white guy getting mobbed and beaten over the head with his bass guitars in the riot footage.

Good luck Mark. And don't worry. Remember, they asked you to be there, so they obviously recognize the skills

If you need a DI box, the 3Leaf Enabler is a really good one - but hard to find!

Here's what I learned:

If you have a good sound engineer with Pro Tools you don't need to know how to play anything.

Then there's hope for me!

Our usual venue the local village church hall that we use every other Friday is being used today for its proper intended purpose! 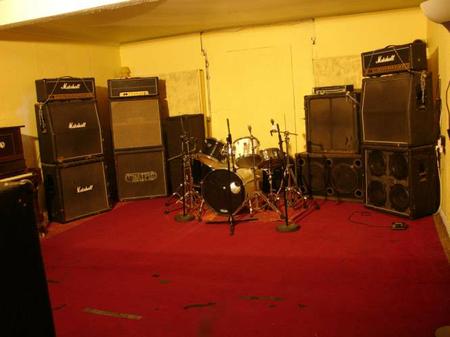