zorya
Posts: 3
So, I've been playing bass for quite a few years now, but I have very tiny hands and fingers! Like, my index, middle and ring aren't a problem at all anymore, but I always struggle with my pinky fingers because they're just like super thin and short and basically useless. I have broken my left pinky twice before so it's just this weak crappy piece of sh*t now. Even though I've been playing on-and-off for about five years now, I still don't have the strength in my pinky finger to hold down a note properly so I usually do my ring finger and pinky finger together at the same time. It's really holding me back because there are some chords that I can barely do and certain songs that are just feel impossible. I don't really know any other girls or guys with small hands who play so I have no one to ask! Do any other people have this problem? It's been years, so should I just give up trying or should I keep trying to build up strength? I feel like it's hopeless.

My ring finger is weak so I use my little finger instead, backed up by my ring finger. I don't find it a problem at all and you should do what you feel comfortable with, there is no real right way or wrong way, if it works for you that's all that matters. Welcome to BBT by the way

I just use my three fingers! There's some shifting going on however this can't, in my case be helped. I'm a guy, but my little finger wont even touch the fourth fret. I used to worry about technique, you know, “one finger per fret”! In my case that just “aint” gonna happen! As Marko 1960 stated there is no real right or wrong way! As long as it works for you! I play a short scale bass (Gibson EB3) THAT MAY HELP (I still can't reach the fourth fret lol)

I dont have a great deal of strength or mobility in my pinkies either. I can use them on the treble strings a little bit but not much else so I just use index, middle and ring.

Do you know about Django Reinhardt? He suffered some burns which paralyzed two of his fretting fingers and played guitar like a madman!

What does not get talked about in the music industry much (playing strings) is finger exercises.
I'm not referring to playing Scales, I'm referring to actual finger/hand exercises and I do them every time before I play.

Pop those knuckles if they need it, pull and push on those fingers and give them a good stretch. Those muscles and ligaments need a good workout, just like a Track & Field Runner needs to stretch their legs, a bassist is no different when they need to perform.

Just browse the Net, there's plenty of information and guides on Finger Strengthening Exercises if you are unsure of how the proper way to start. As with anything, safety first - never over do it and know your limitations.

Exercising your fingers is the only way to build strength and improve your reach.

I'm 6'5", so I don't have small hands at all. I have good strength in all of my fingers, but what I don't have is speed and control.

Control is coming along with practice, but at my age I don't think I'll ever have the speed.

It helped me a lot when I stopped thinking about speed but about ‘moving less’. That's when I got faster. 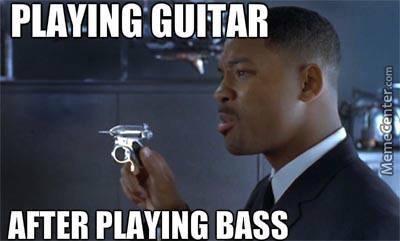 Quote:
It helped me a lot when I stopped thinking about speed but about ‘moving less’. That's when I got faster.
Yeah, the one finger per fret thing with the anchor finger wotsit, gotcha
<< <
1
> >>